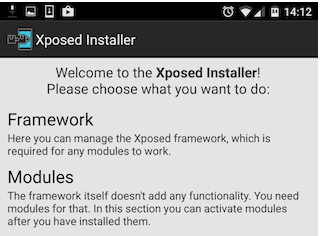 It gives apps — or modules, as they’re called — the ability to make system-level changes to your device, of the kind you would have previously needed to flash a custom ROM to achieve.Customize Your Phone Without Flashing a ROM With The Xposed Framework It is common knowledge that the best way to customize your Android device is to flash it with a new ROM. It is also wrong.

Installing Xposed on Android 4.4 (or lower) devices is as simple as installing an APK file; on 5.0 Lollipop and higher it requires an extra step.

Tasker is one of the most powerful apps available for Android, and it is available through the Play Store. However, this automation tool has a very steep learning curve and isn’t something you can properly evaluate within Google’s 2-hour refund window.

So, before you choose to buy it, head over to the Tasker website and grab the trial version. It lasts for seven days, and you can even uninstall and reinstall it to extend your trial period further.

It is as comprehensive a file explorer as you can get, with a powerful search function, support for compressed file formats, integration with 19 cloud providers, built-in image and media players. Plus it has a text editor, full root capabilities, and lots more — all wrapped up in a customizable, Material-inspired design.Exploring Android L: What Exactly Is Material Design? Exploring Android L: What Exactly Is Material Design?You may have heard about Android L and Material Design, but what exactly is this new design philosophy and how will it affect Android and other Google products?

It’s completely free, and must be downloaded from the official support thread at xda-developers. The app continues to get updated on a regular basis too.

If you struggle to get a good night’s sleep, there’s a chance your smartphone use is to blame. Phone and tablet screens emit blue light at a frequency that tricks our brains into thinking it’s still daytime.

Short of not using your phone after sunset, the solution can be to use an app that filters the harmful blue light. It should help you sleep better and will reduce eyestrain as well.

The best blue-light filtering app for Android is CF.lumen, as it works in both root and non-root modes. You can download the app from the Play Store, through which you can unlock the advanced features via an in-app purchase. But if you download it straight from the source you can activate the Freeload mode, which enables you to unlock the Pro features without paying. Of course, if you like it, you should probably pay for it to support the developer.Get a Good Night’s Sleep by Filtering Your Phone’s Blue Light Get a Good Night’s Sleep by Filtering Your Phone’s Blue LightYour phone’s screen is keeping you awake. Don’t let it. These apps will help you rest well.

That link also has versions that work on older devices — the Play Store one is Android 5.0 and later only.

Viper4Android is a very powerful audio equalizer app for rooted devices. You can use it to create and customize audio profiles for your phone’s internal speakers, as well as your headphones and Bluetooth audio devices.The Best 4 Android Equalizer Apps for Great Audio The Best 4 Android Equalizer Apps for Great AudioWhether you’re listening to songs or podcasts on your Android device, you need one of these awesome equalizer apps.

It isn’t the easiest to use, but if you’re willing to invest the time to learn it, it can produce great results. The official version of this open source app can be downloaded from here, while a thread with more information can be found over at xda-developers.com.

The version of V4A found in the Play Store is not the official one, by the way.

It’s common for Android device manufacturers to install exclusive extra software on their phones. A lot of the time, this is a bad thing — it’s annoying bloatware that you’d rather remove — but occasionally, the apps are worthwhile and even desirable to users of other devices.How to Remove Bloatware on Android Without Rooting How to Remove Bloatware on Android Without RootingDid your phone come with a bunch of crappy apps pre-installed? Let us show you how to get rid of them the easy way.READ MORE

In these cases, you can trust the developers at Android enthusiast site XDA-Developers to pull the apps and make them more widely available.

The best recent example is the rather splendid keyboard app for the BlackBerry Priv. It’s fast and intelligent, very cleanly designed, and comes packed with the kind of shortcuts and tricks that were the hallmarks of classic BlackBerry devices.

Remember, this is all very unofficial, so it’s liable to disappear, and you may encounter bugs with the software. Download from here.

Have you tried any of the apps we’ve listed here? Or do you have any other favorites that aren’t in the Play Store? Let us know in the comments.