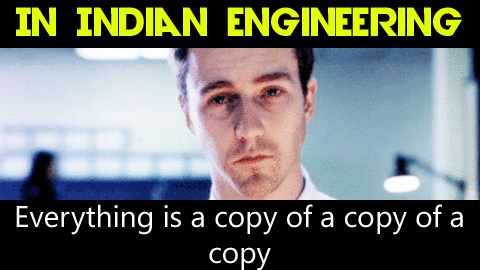 Today I will be writing about Engineering, the Computer Science Engineering (including IT). The stream of engineering, which is a buzzword as well as being Bamboozle. Let’s begin our journey from the beginning of the preparation of dream world of every Non-Medical Student in India.

The Beginning of the Dream – appearing for JEE main exam

As the student passed matriculation examination, the most difficult choice ahead of a student to choose the field which he/she should opt to build his carrier. If you are the lucky one who is having a well understanding and educated family then it’s not a very big deal. But generally, there is a ritual in Middle-class Family, that we go for advice to the elder brother or sister who is currently opting or have done their study in that field. Generally, instead of giving them proper guidance and showing him/her right pathway, they always ask why do you want to take xyz field it’s too tough. You should go to ABC field it’s popular nowadays. What’s this nonsense? The person came to you in hope that you will be the best person to guide in his favourite field.

Then came, the dream builders (fake or real its depend) which are local Institutions, who promises that we have the best faculty in the nearby locality and your student will be in India’s heaven of engineers, yeah you got it right IIT. As demotivated, by experienced cousins, the final options that remain is to join that institution. But since every mind is not that much adapted to tackle problems, because some have creative mind some are better writers. So most of the students fail to crack examination of IIT and ultimately some of them join private colleges or local government colleges, or some drop the idea to go for engineering and choose another field because of again advice from so experienced family members.

If you want to join particular stream or field may be its music, or arts, or Non-medical or any other. Go for it. Don’t listen, experienced people, only if you are serious about your passion. Being a Computer Science Student, a personal suggestion to the students that If you are preparing for IIT there is no problem in that. But if you are really passionate about Computers, learn programming basics (and don’t approach to any local institution for that, because programming is learned with practice not with joining Popular Institution ) instead of learning tips and tricks to crack various Chemistry and all another subject which will be very less useful to your field. Don’t be a sheep moving in Heard

The Dream is bit modified or broken, or for someone, it is completed

Now, suppose If you somehow able to get admitted to IIT, then the condition is going to be something better(assumption since I am not an IITian) than getting admitted to a local college may be its private or government is similar to making fun with yourself. The condition is very worst in the local colleges because of the following reason:

Most of the faculty employed in these college are those people who have knowledge about the subjects they were going to taught to the engineer of the future. But unaware of those technologies that is using in industry. Even if they have knowledge about industry but due to boundation by various rules of the universities and senior Professor, does not allow them to speak to imply changes that were benficial not even for the students, but for the students too.

The four crucials year of the engineering span in which are the real foundation that make his engineering carrier as better as IITian they were being taught what are tags(considering HTML), why alt attribute are used in image tag. No matter theses are the basics of the web development but spending 6 months on just teaching them these basics would be enough? I don’t think so. The industry those who were working on thoe technology or frameworks, with which students are not being introduced in their college span. And when they enter to the industry they need to learn those skills there. which not only minimize the growth of industry but also the whole nation growth.

The students reading in those institutions generally focused on theory rather than learning the skills that really makes an engineer.

If you ask a toppers of these institution, about a very simple term of Encapsulation what they will answer is,

Encapsulation is defined as the wrapping up of data under a single unit.

But if you ask them explain it practically there will be complete silence in the room. Why?, Because what they learned from books or what teachers taught them was the definition, Not the practical explanation of Encapsulation. When its time to submit the projects or the assignments what basic strategy were being followed is copying from the one who has finished his task, as the title image clarified, about engineering.

Engineering is not about competition with each other its about building ideas with each other. The biggest problem is feeling of competition with each other that they learned during schooling period, the act of being cunning and to betray other by hook or by crook  and lack of unity. If someone is helping them to understand any concept, instead of learning them in right way, they were curious to know how do you know that, you don’t study these subjects. Brother if you are getting help from other, respect their help. Don’t have intention to compete with that person. Otherwise you will break the bridge of knowledge you are getting from others.

List is very long an Industrial professional could elaborate it more. But the main reason that arose due to various reason is that the industrial professional needs to spend time and their resources to teach the engineers the skills that are the major demands in market. That ultimately leads to downfall in the growth of their industry, which is not beneficial for them. So they ahead towards IIT.

There are more reason that are making engineering the worst profession, few of them is explained above that are creating unemployability in the IT sector. Engineering is not the profession of learning and sitting in classes, it is the profession where we build that others can’t create. There is nothing special with the degree you earned after B.tech or M. Tech, In the industry the MCA scholars and even students from other branches have to do same stuff.