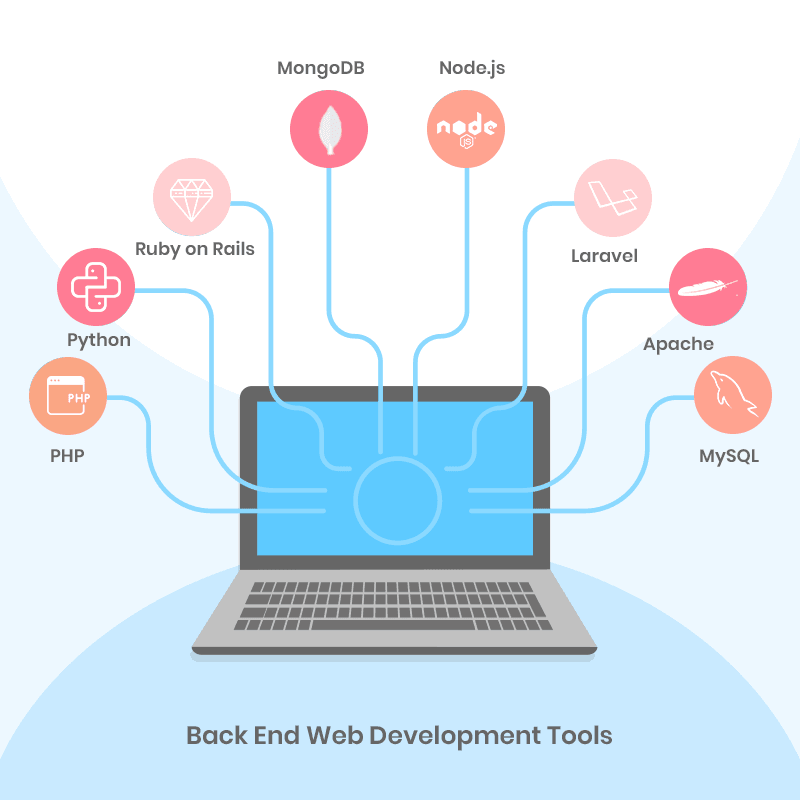 A website, mobile app, and web-based apps are the doors for us to participate in the modern digital era we are noticing today. It’s your portal to invite users to come and visit your products and services. Every online businessperson pays attention to best web development tools for developing the landing pages or simply the web pages that everyone sees upon your website visit.Though HTML, CSS, and Java make the front end development successful, the real magic happens at the back with the backend technologies. Back end web development is the ecosystem which really powers your website.

In the following list, we’ve put together a few best backend languages and best backend frameworks to have in their toolkit. Read on and learn more about some of the best resources on the Best Back End Web Development Tools For Web Developers.

Ruby on Rails is a popular open source web application framework which uses the Ruby programming language. A decade ago, when Rails burst in the field of web development, it continued to scale up elegantly to build dynamic websites and web apps quickly and efficiently.

Rails garnered an active fan following, especially among tech startups and SMEs. Maybe this is the reason why every software company today represent itself as Ruby on Rails development company.

In fact, a few best-known firms out in the market use this back end web development tool including Airbnb, Groupon, and Bloomberg.

Since its introduction, PHP is known as the world’s most popular server-side scripting language which comes pre-installed on most hosting sites. There exist many well-established PHP frameworks that make developing applications more intuitive and agile.

Python is a popular back end language for building applications. With a reputation for being comfortable, and fast, it carries full support. Therefore, Python is considered the best among many back end web development languages for programmers, developers, & many new clients who just entered into the online business.

Moreover, it’s also the preferred choice of language for the data scientists and engineers. Here, are a couple of the most popular Python frameworks: Django and Pyramid.

Node.js is a cross-platform and open-source JavaScript runtime environment that develops a diverse variety of server applications and tools. One most prominent feature of Node.js is that it contains a built-in library; that allows applications to act as a web server in the absence of software like Apache HTTP Server or the IIS.

Laravel is also a PHP back end development framework. Known for its elegance and simplicity; and meets a diverse range of programming needs and projects, starting from beginner to advanced. Then too suits well for projects of all sizes and types and sizes.

Created in 1999 as an open source web server, it currently uses 50.1% of all the websites. These numbers indicate the reliance that people place on Apache to run their web services. It’s a reliable, proven web development tool that really played a key role during the early growth of the internet.

MySQL is the world’s most popular and commonly used open source relational database. It is easily accessible and often known to be a part of the web development stack, standing for favorite tools like Linux, PHP/Perl/Python, and Apache.

MySQL is free, easy to set up, and fastly scales and that’s why this is the best match for backend developers. This is the reason why the best Python development companies use MySQL as their database.

MongoDB is a free, open-source NoSQL database system that saves data in binary JSON format. It is easy to pass data between the client and the server.

The Mongo DB platform is closely associated with MEAN (MongoDB, ExpressJS, AngularJS, and NodeJS), and is a JavaScript-based set of technologies for building web applications.

| Also Read | Backend vs Frontend Difference you need to know

PageSpeed Insights are a helpful web performance tool whose purpose is to analyze the content and web page speed. The output is a report of your website for both desktop, and mobile versions along with a set of recommendations make the page faster.

WebPage Test provides a free of cost website speed test from multiple locations around the world using browsers like IE and Chrome. The output provides you a rich set of diagnostics like Page Speed optimization checks, resource loading waterfall charts; and suggestions for improvements.

To sum it all up; back end programming languages and frameworks, database management systems, web servers, and speed testers are all the essential back-end development tools.

30 useful Chrome extensions for web developers, You will Love to